Cookbooks…I love them, I have got so many (too many!) I did a rough count the other day as I wanted to order a couple more and it came to over 100! One hundred cookbooks, how can I still need more?

Here’s my excuse…I don’t use all of the cookbooks I bought in my twenties (pre- kids!), I simply don’t have the time for complicated recipes so I have been looking at family cookbooks for inspiration.  Well, I can definitely say ‘Very Veggie Family Cookbook‘ by Sara Ask & Lisa Bjarbo is the cookbook I needed for now! 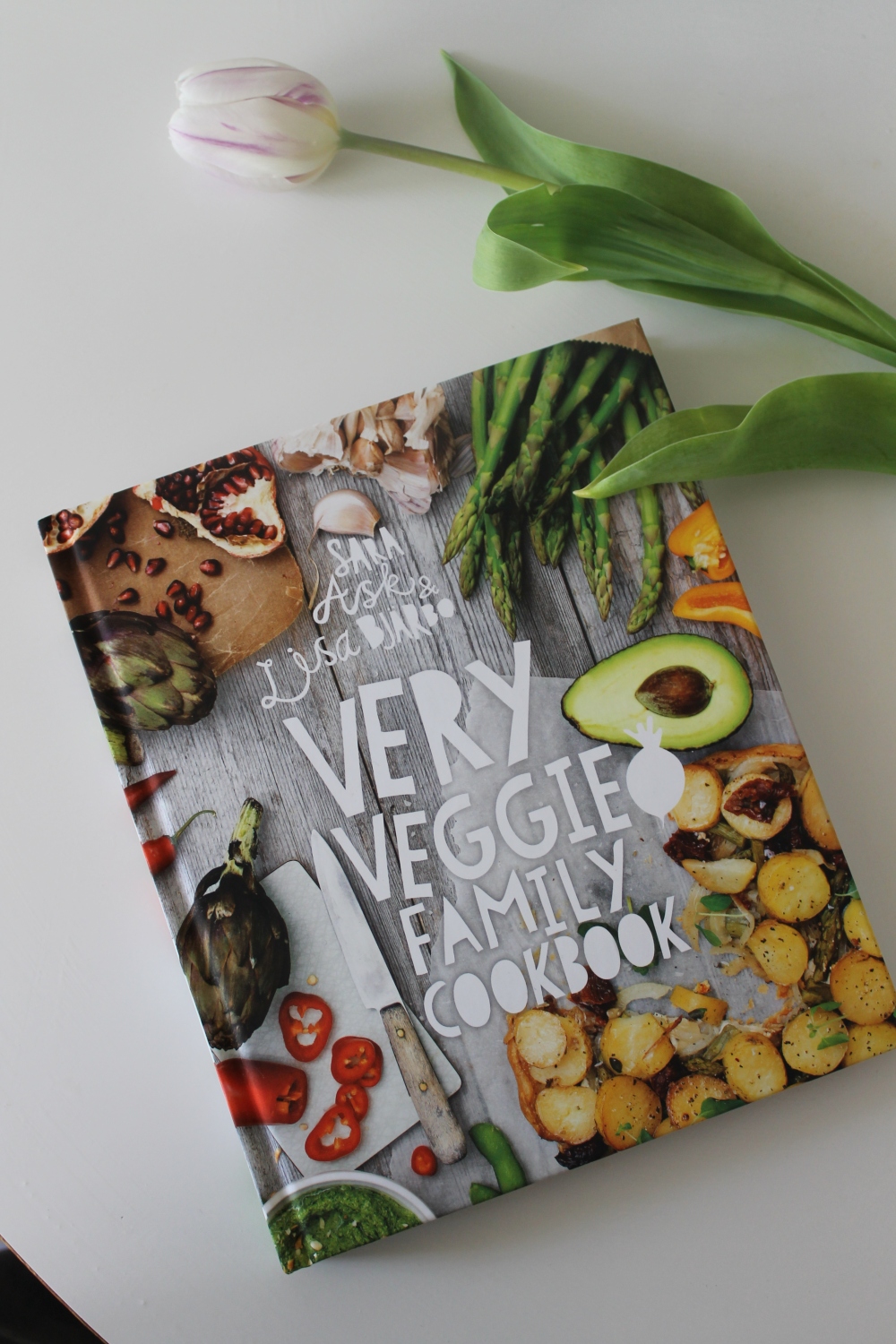 I love the look of this book, it is fun & colourful. The photographs show real happy & slightly chaotic families which I can relate to. I also like the way the cookbook is divided in chapters depending on how much time you have to cook. There are some easier recipes for quick weeknight dinners and other recipes for when you have a bit more time. The chapters are divided into ‘chaotic days’, ‘normal weekdays’ and ‘weekend at last’ as well as ‘snack & sweets’. It’s not the thickest cookbook (it contains 60 recipes), but I do find most of the recipes inspiring. It features recipes such as ‘ Black Bean burgers’, ‘Veggie nuggets’ and ‘mini sunflower pancakes’.
If you are a meat eater but want to include more veggie meals into your family’s week, I would say this is the cookbook for you. If you are vegetarian you should note that not all recipes are strictly vegetarian as some include parmesan but there are handy tips and vegan friendly options too.
After testing several recipes I can only recommend this cookbook, my only criticism is that  it does include maybe a few too many savoury pancake ideas and from my opinion could of done with few more snacks and sweets recipes.
Now, lets talk recipes. This wouldn’t be a proper review without testing them.
Tofu fingers

What a great idea, just like fish fingers but made of tofu! I had to give it a go. The night I decided to try them was one of those nights when both kids were needy and hungry. I had to cook most of it one handed with a toddler on my hip ( which is a good test as I does quite often turn out that way!). Due to the situation, I was a bit worried about trying a new recipe but it was actually fine. The recipe was easy to follow and it turned out brilliantly. I served mine with rice & peas instead of the mashed potato & cucumber sauce as suggested in the recipe. My 18 month old ate all of the tofu fingers and seemed to love it. My 3 1/2 year old thought they were fish fingers at first but wasn’t too sure about them once she realised they weren’t. I have to say she is a bit difficult about anything new at the moment though.

For our grown ups meal later I made a egg fried rice and served the tofu fingers  on top which was delicious. What a success, I will definitely be making these again!
Chickpea Curry with Peanut butter & lime

This recipe is in the chapter for chaotic days so it really doesn’t take very long to prepare but look at the result, it’s amazing! Not a lot of cooking involved, it’s mainly combining several ingredients and it’s genius. The bananas are optional, and I may not add them next time but it was worth a try. Everyone loved it, I can see myself making it again and again as it was simply delicious.

I thought this recipe sounded delicious and it was. I knew it wouldn’t really be one for the kids as they are not so keen on mushrooms but I still wanted to try it. It takes a little longer to prepare and therefore is under the ‘weekend at last’ chapter. The hazelnut paste takes this lasagne to a different level, I would make this if I had veggie friends over for dinner. As for the kids, I was so surprised to see my youngest one eating it, he did so well. As for my daughter, she didn’t eat much apart from the cheesy topping. I found it interesting that Lisa Bjarbo & Sara Ask explain that children between the ages of two and five are at there most sceptical towards new dishes & flavours.  I guess I will keep making this recipe (as I loved it so much!) and eventually she might eat a bit more of it.

I also tried the ‘Chocolate Mousse with Avocado’ which was such a success it all disappeared before I got a chance to take any pictures of it!

I can see this cookbook becoming one of the ones I use so often it gets splattered in tomato sauce or chocolate fingerprints. That’s how you can spot the best cookbooks from my shelves.

Please note: Although the publishers sent me a copy to review, all opinions are my own. Many thanks to Pavilion Books for sending me a review copy.

Life, Nature and the Garden

Word of Mouth blog | The Guardian